The Sound Vision of Jan Hautekiet

The world we live in at the moment is quite difficult, with the pandemic and the measures taken to stop the spread of the virus. For everyone, regardless of their age, where they live or the industry they work in. Of all industries, the cultural one might have been hit the hardest. Where some sceptics talk about ‘those few gigs and festivals that were cancelled’, it actually affects millions of artists, actors, musicians, production - and other staff who’ve been out of work and income, all over the globe, for months. That’s why we thought it was time for an update, coming straight from the people in the industry. This episode of Sound vision: Jan Hautekiet, musician, writer, radio maker and chairman of Sabam.

‘Not much different to anyone else. You’re trying to keep your head above water. After the first nine months of the crisis, you come to the conclusion a lot more is possible than you initially thought before. The pandemic has made processes that were not yet in place before, come into an accelerated mode. the digital approach and way of working we’ve always wanted to implement into our system and company, now actually is implemented. Our industry, the creative, art and performing arts has been shaken to its core and forced to come up with creative solutions. And to my pleasant surprise, those solutions are being presented, too.’

‘For a lot of people, the crisis simply means a long time of working from home. Which is easy, if you have financial certainty. But if you are going from one project to the next as a freelancer and those projects all fall through at once, without perspective...that’s a whole different story. We see small and big drama’s happening. This truly is like a lightning strike for the whole industry, from which we’re trying to recover. Slowly. The crisis has taken a lot of our resilience. But it is necessary that the industry gets an impulse, globally. Our government needs to help boost a relaunch. Yet this is going very very slowly at the moment. I’m experiencing it first hand. The first 3 months were really hard, and we were forced to face the facts. Luckily, during the summer, we got to do a bit more. Now, the perspective isn’t that bright, as we know we won’t be able to go back to the old ‘normal’ any time soon. We need to change our way of working and I am determined we can. I don’t deny the impact of this crisis, be it short term or long term. But what I do see is that, even though it is forced by circumstance, a lot actually is possible. And that gives me perspective and makes me happy.’

‘Online and digitally, a lot is possible. At the start of the crisis, the saying was: ‘we are not going to start again until we can go back to normal (concerts)’. Yet, in the meantime, everyone has been searching for ways to start, online. Just take a look at Eurosonic. The festival was completely organised online this year. With one click of a mouse, you were able to go from one stage to the next. It gave so much information in a short amount of time. Obviously, this isn’t anything compared to the ‘real thing’, but at least it is something. Between doing something, learning as you go and turning it into a solid business model, there’s a lot of time and energy. We’re currently in a forced learning phase. Things that seem applicable in theory, don’t always work in practice. The work processes are difficult. But, somehow, we’ve made it through the past year. 2020. And the year has taught us a lot. Why haven’t certain practises been implemented sooner? I’ve learnt a lot this past year. And it might sound weird saying it, but somehow, the period has been an interesting one, too. Slowly, but surely, I’m finding my own way back to the ‘new, temporary, normal’. Both as a visitor and as a participator. It doesn’t mean to say that there is a completely different dynamic, live streaming a concert instead of a real-life one. The two really can’t be compared. It is harder than we thought it would be and not as easy to combine with a limited crowd. It’s a learning process.’

‘As a performing artist, you are now forced to think about your sources of income. How are you going to create additional funding? You need to find new models, seek out additional funding. New ways to generate revenue. It is well known that creatives don’t really want to think about finances. That’s why the joining of different forces, organisations and expertise are even more important now.’

‘Within Sabam we see - with over 43.000 creators of all shapes and sizes in our network - that the ‘normale’ revenue streams, such as income generated from the ‘live music industry’ aren’t anywhere near what they usually are. That is why with Sabam for Culture, our existing fund, we try to help events and shows where we can. But also with the introduction of Fund Belgian Music, together with Galm, Facir, PlayRight and support from the Koning Boudewijn Foundation. With this fund, we help productions that have been put on hold by the crisis, back on the right track.’

‘Besides the two funds, we make sure to pay the entitled parties (Sabam members) as soon as possible. Each actor or publisher also has a reserve, the so-called social fund, a buffer of deferred royalties, that our members can appeal to earlier than they normally could (from the age of 60). But without the help from the government, we can only help so much. We, however, do expect additional funding and measures from the government. With the help of cultural activity premiums, a few live streams and shows have been made possible, but this funding doesn’t necessarily go to Belgian authors. Also, in Belgium, you need to knock on different doors to actually get funding and all of the different ‘doors’ - Flemish and French - handle the situation differently. We are really just waiting for a ‘real’ answer from the government now.’

‘For now, we’re waiting for sustainable measures. The damage to the industry is huge. The first project call for Fund Belgian Music gave us 600 files; concerning a budget of 14 million euro. In total the call for support was 3,5 million; 25% of the budget, not unreasonable. Fund Belgian Music has helped 49 music projects with 120.000 euro. Help really is needed: structurally.’

‘Luckily, there is a lot of deliberation and joining of forces between several similar Belgian organisations. The most there has ever been, in over 20 years. Things have been put into motion. And if that tells us anything, is that the flame within the industry is still going strong. There are more talks and consultation, with an organisation such as PlayRight, with whom we set up Fund Belgian Music. Pre-corona certain collaborations were already in place, with the collaboration with PlayRight and SIMIM, as we are building a unique platform that will help navigate music rights for parties entitled to royalties. Our cooperation shows promise and I hope we don’t lose that feeling after the crisis is over.’ 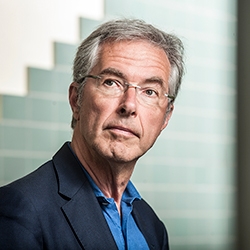 Jan Hautekiet (1955) has been chairman of Sabam since 2018. Sabam is the Belgian association for writers, composers and publishers. Purpose of the association is to collectively manage copyrights and royalties in Belgian of her 40.000+ authors they represent via reciprocal agreements with other collective management associations, worldwide. Sabam is multidisciplinary and represents composers, writers, publishers, choreographers, directors, journalists and (visual) artists.

Besides his work for Sabam, Hautekiet is active as producer, radio host, musician and writer. In 2018, he said goodbye to VRT, after having worked at the Belgian broadcaster for 40 years. Jan is also active as a musician in several projects and occupations. As a composer, he has been making soundtracks for film and theatre since 1981. As an author, he writes columns, biographies and books.


Wat to read more ‘Sound Visions’? Go here​ for the other interviews in this series.

If you need more info or if you’re interested in this service for your country and/or organization, use our contact details below or contact form to reach us.

We are almost there...Please tell us who you are and what you are looking for, so we can help you in the best way possible!